A Fish Shack on the Nile 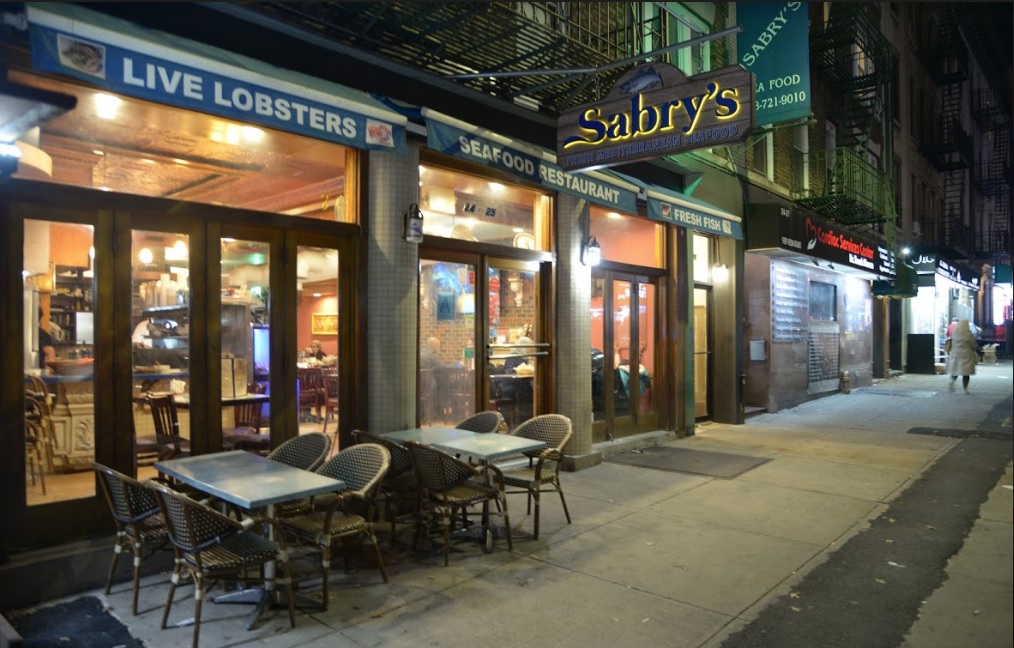 A FISH SHACK ON THE NILE

THERE is a Big Mouth Billy Bass resting silently on the mantle of the faux fireplace at Sabry’s. And so long as it doesn’t start singing during your meal, why not? Sabry’s is a seafood restaurant, and even if it’s Egyptian, it’s entitled to some sea-theme hoke.

But the display of whole fish on ice in the center of the restaurant does a much better job of stating its theme, making it seem like a cheaper, Egyptian stepsister of Estiatorio Milos.

Unlike its more grandiose Greek alter ego in Midtown, however, Sabry’s serves neither wine nor beer, in accordance with Muslim practice, and the restaurant’s staff will not permit you to bring your own.

And the décor looks as if it were born of a restaurant supply fire sale. At least seven styles of tile are employed from floor to ceiling. Some of the plates are decorated with the name of a restaurant from another era; the tables are topped with brightly colored illustrations of koi swimming and Chinese characters. Thick blue disks jut from bright orange walls with a randomness that would be hard to explain in a video game’s interior design scheme.

But no one is going to Sabry’s for its looks. They are going for fish.

Whole fish are available baked and grilled. The waiters, if you prompt them, will encourage you to go with the baked option. Follow their lead. The selection varies, though not widely, night to night; on most visits they had red snapper ($17.95), striped bass ($16.95) and red mullet (four to an order; $14.95). If you show an interest, the waiters will accompany you to the display of fish, show you what’s what, and let you pick the particular fish you want for dinner. Baked or grilled, the fish are seasoned with lemon, oil and cumin, cooked quickly and expertly, and served without adornment, save a sprinkling of fresh herbs. On occasion, the fish may require additional salt at the table.

But as well suited to summertime eating as the grilled fish are, it would be a mistake to visit Sabry’s and not try one of their tagines. Three versions are available, one with squid ($11.95), one with shrimp ($14.95) and one with both ($14.95). I preferred the one with both. The seafood is baked in a long-simmered but brightly flavored tomato sauce spiked with cooked cilantro and whole coriander seeds. Biting down on the occasional coriander seed releases a surge of peppery heat and the seed’s floral perfumed flavor. The kitchen has mastered baking the tagines so that the topmost layer of tomato sauce is seared to a tomato pastelike sweetness but the seafood below is never overcooked.

The shrimp were as plump and sweet fried ($14.95) as they were in the tagine, though on account of the size of the servings, ordering the fried combo ($14.95) with squid and scallops (when they have them) may be better if you are not dining with a large group.

Entrees are large enough to render appetizers unnecessary, though grilled octopus ($9.95) in a simple dressing and the fried eggplant side dish ($2.25) are good options if you elect to order them anyway.

The main courses come with a plate of black olives, another of tahini, a basket of fresh baked pita and a salad. The pita arrives scorching hot, seconds out of a top-loading tandoorlike oven. The dilly tahini is perfect for quenching the heat of the pita and enlivening the salad of chopped romaine tossed with cucumbers, tomatoes and parsley.

Sabry’s does not serve dessert, so when dinner is done and you are standing on the avenue wondering which way to head, there’s a decision to be made. South on Steinway for pastries and a hookah at one of the Egyptian cafes? Or west for some yogurt and honey and a little ouzo over in the Greek part of town? The night is teeming with options.