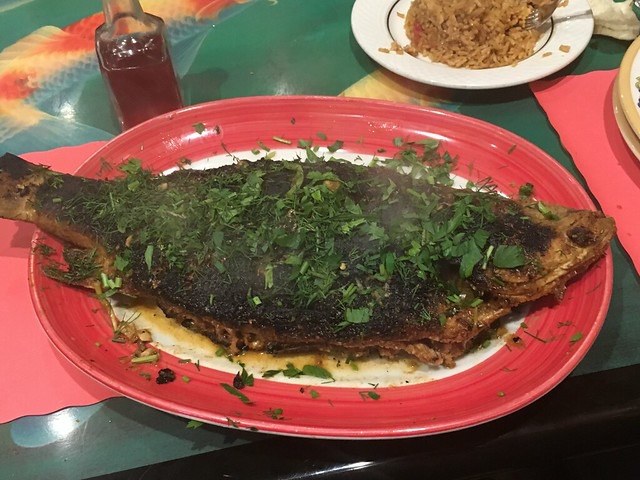 We had a really lovely meal here the other night… On a hunt for some good Greek seafood, we ended up at this Egyptian restaurant, very close to Ali’s.

The place is bare bones, there is a small display filled with fish on ice, some cheap decor and cheap tables with pictures of Koi on them.. Jax was in love with the table.. The staff is friendly and very laid back..  When the four of us arrived, we were the only people in the place, they had a high chair for J man and all was good..

We started with the incredible and I mean freaking incredible Pita and Tahini.

Hot and freshly made, I was full before the food came..

Tahini, i know it has been a long time but, i want to say this is the best Tahini I have had.

We ordered the 3 lb Seabass. It was huge, we asked for it to be served traditional Egyptian Style.. The fish was cooked perfectly.. It had like a blackened flavoring with something different, a lot of Dill..  In fact, the entire meal had a lot of dill.. From the tahini, to the tomato sauce , to the fish, dill was everywhere..

One thing disturbing about the fish was, i am not sure they gutted the fish.. I feel like they added some flour mixture to the insides, and fried it.. I think the fish was deep fried and then fried on a flat top.. But, there was some sort of flour mixture added to the roe or the guts.. It was really strange, i don’t know how they did it and it was super fishy.  I enjoyed it and ate some but, did not share any with the family for fear of scaring them..

While this rice appears to be pedestrian, i assure you it was not.. lots of onion and I want to say sweet from raisins but, i didn’t really inspect..

Way too much food already, considering all I really could have used was the pita and tahini but, we like leftovers these days..

Squid and shrimp in a rich thick tomato sauce that has dill in it..

While it was good, this is something i make at home all the time, minus the dill..

We took plenty of leftovers home.. Last night, I made Miss K spaghetti with the clams and squid from the taojin with some fish,  Jax and the two of us,  had some of the fish, with a beautiful finishing olive oil and lemon juice.  And the left over rice.

Our Bill for everything was 80 dollars, the over 3 lb fish was only 40 bucks..

By the way, the place has been Michellin Recommended for the last two years.

For me, it was interesting, i would go back to try their lobster.. But, really, i thought the quality of everything was great ,i just don’t love dill that much..

The neighborhood is all Middle Eastern.. Tons of men sitting in Hookah Shops.. Jax was a hit, high fiving everyone as he ran down the street in his nike track suit.. Lots of interesting looking places.